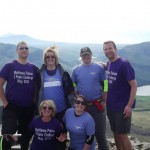 On May 15th A team of local Accountants from Swansea and Merthyr Tydfil took on the National Three Peaks Challenge, that is the climbing of the three highest peaks in Scotland, England and Wales all within 24 hours.

Mike Matthews, of Matthews & Co Chartered Accountants, stated that he and his six colleagues conquered it with 26.5 hours, securing over five thousand pounds in sponsorship monies for Maggies Centre in Swansea and Stepping Stones Uganda.

Starting at 5pm on day 1 at the foot of Ben Nevis (Scotland) the team of seven climbed the 1,344 metres to the top, before heading off to Scafell Pike (England) and climbing a further 978 metres at 4:45am on day two. The last leg of Mount Snowdon in Wales was a modest 1,085 metres and culminated safely at 7:30pm.

The challenge is well known for testing endurance levels with little time in between the peaks to recover, particularly in a mini-bus en-route to the next start point. This is something that was not lost on Matthews who believes the cause justified the inevitable discomfort, “Maggies is very close to our hearts for a number of personal reasons for the team. We are so fortunate to have a facility of that standard here in Swansea”. Talking about the international charity Matthews goes on to say “Uganda is a long way away from having any such infrastructure, and Stepping Stones Uganda helps restore communities, creating communal focus on shared infrastructure projects such as water holes, agricultural and education facilities”.