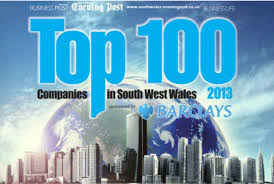 At the prestigious Top 100 companies in South West Wales luncheon held on the 18th September at the Marriot Hotel, Dawnus Construction was recognised as having the highest pre tax profit award in the Swansea region with Dr Organic and Bakers Morriston coming second and third. In Neath and Port Talbot Pump Supplies, Sandvik Osprey and J G Hale Construction were 1,2 and 3 respectively and in Carmarthenshire Mistui Components followed by Group WRW Cyf and Morgan Group were 1st, 2nd and 3rd.

Matthews & Co, with tax planning being a key service offering,  were delighted to have sponsored this particular category as businesses generally recover and optimise their profitability.

The awards come at a time when the Top 100 companies generated a whopping £481m of profits, up £82m on the previous year. Even more pleasing is the fact that in the Top 10 itself 7 are indigenous companies.

Compiled by Swansea Business Life and the South Wales Evening Post and sponsored by Barclays Bank the listings are a key benchmark of how our economy in South West Wales is starting to recover. There are some fantastic businesses in this beautiful part of the world and we really should be proud of what South West Wales has to offer.